What is Sleep Apnea?

Sleep apnea is a condition in which your breathing stops periodically during sleep, as many as 20-30 times per hour. Each time you stop breathing in your sleep, the resulting lack of oxygen alerts your brain, increases your heart rate, which temporarily wakes you up to restart proper breathing.

Since the time spent awake is so brief, most people with sleep apnea don’t remember it, and many feel like they are getting a good night’s sleep when, in fact, they are not. The constant wake-sleep, wake-sleep cycle prevents those with sleep apnea from achieving deep sleep, resulting in a constant drowsy feeling during the day.

At Drew Dental we screen every patient who wants to join our dental family.

During sleep you should mainly breathe through your nose. This allows the air to be of better quality and you will actually get more oxygen, which can lead to a better and more restful night’s sleep.

Snoring is the sign of a breathing problem. It occurs when the jaw opens and the tongue falls into the back or the throat causing the airway to narrow and forcing air through the smaller opening. This creates sound vibrations in the throat known as snoring. Snoring can seriously affect your quality of life. It can be embarrassing and inconvenient, and can cause problems in relationships. In some cases, snoring is a red flag for a more serious medical problem called obstructive sleep apnea (OSA).

What is Sleep Apnea?

Sleep Apnea is when the airway is completely blocked and air is unable to flow through the airway. This is also known as Obstructive Sleep Apnea. The obstruction may occur from the area of the soft palate to below the base of the tongue, causing one to awaken during the night with coughing or a gasping sound, attempting to restore breathing

Are there different types of sleep apnea?

There are three categories of sleep apnea:

1. The most common is called obstructive sleep apnea (OSA), and occurs due to a physical blockage, usually the collapsing of the soft tissue in the back of the throat.

2. Less common is central sleep apnea (CSA), in which breathing stops because the muscles involved don’t receive the proper signal from the brain.

3. Some people suffer from “mixed” or “complex” sleep apnea, which is a combination of obstructive and central.

When sleep apnea is not managed early, the lack of healthy rest can cause a massive variety of serious problems and diseases. These long-term symptoms range from strokes and heart attack to high blood pressure and depression. By catching sleep apnea early and beginning treatment, you can avoid the long-term problems associated with the disorder.

The ongoing state of fatigue caused by sleep apnea can lead to problems at work or school, as well as danger when driving. Sleep apnea can cause complications with medication or surgery; sedation by anesthesia can be risky, as can lying flat in bed after an operation. If you know or suspect you suffer from sleep apnea, let your family doctor know before taking prescribed medication or having surgery.

What should I do if I suspect that someone in my family suffers from sleep apnea?

Contact our practice, and we can refer you to a sleep apnea specialist. The specialist may recommend a sleep study to diagnose the precise extent of the problem, and can prescribe appropriate treatment. Depending on your situation, treatment may involve an oral device that we can custom-create for you.

Sleep apnea is too dangerous to leave untested. Don’t wait for it to damage your heart before you come in for a diagnosis. Many people may suspect sleep apnea after a few nights of insomnia or an increase in snoring. While those are both symptoms, they could be symptoms of other sleeping disorders as well.

Since sleep apnea has so many associated causes, tests are used to accurately diagnose it. The standard sleep test involves a night in the sleep clinic that measure your vitals. However, home tests are becoming the method of choice for patients and doctors alike. Whichever test you use for a sleep apnea diagnosis, know that it’s the first crucial step to treating the disorder. 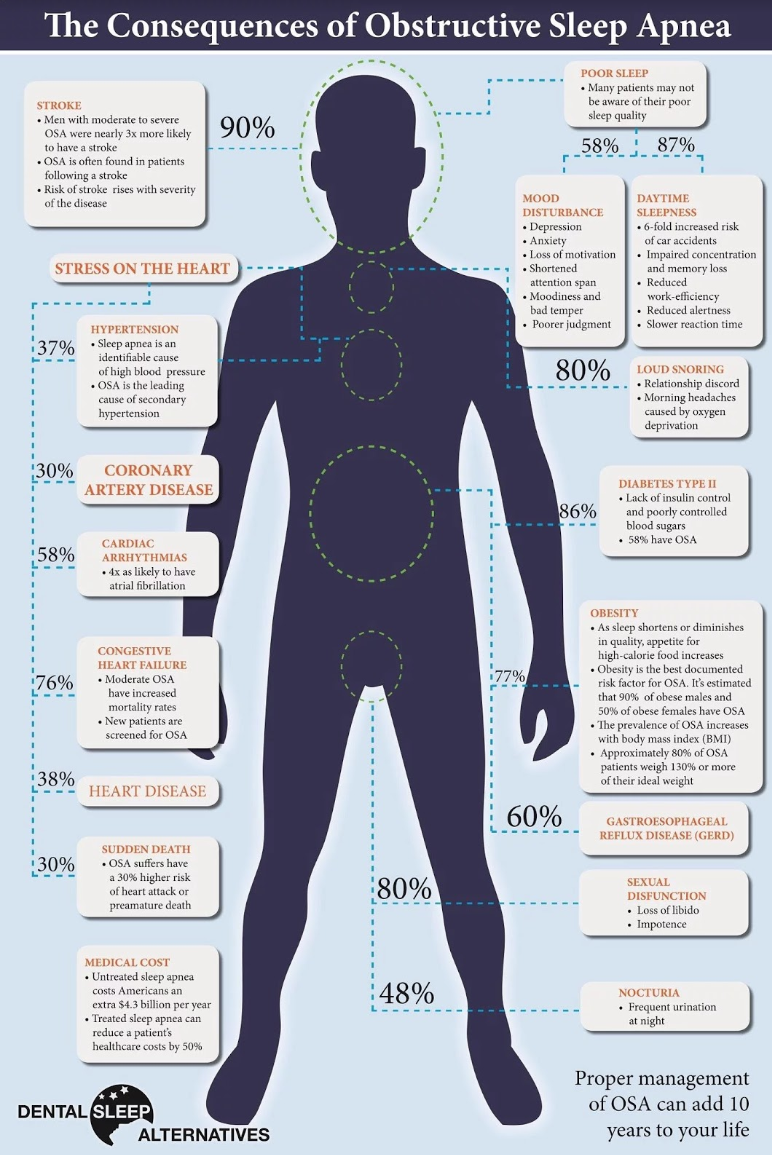