The Mouth Offers Clues to Disorders and Disease; Dentists Could Play Larger Role in Patient Care

Read the Full Article on The Wall Street Journal

The eyes may be the window to the soul, but the mouth provides an even better view of the body as a whole.

Some of the earliest signs of diabetes, cancer, pregnancy, immune disorders, hormone imbalances and drug issues show up in the gums, teeth and tongue—sometimes long before a patient knows anything is wrong.

“We have lots of data showing a direct correlation between inflammation in the mouth and inflammation in the body,” saysAnthony Iacopino, director of the International Centre for Oral-Systemic Health, which opened at the University of Manitoba Faculty of Dentistry in Canada in 2008. Recent studies also show that treating gum disease improves circulation, reduces inflammation and can even reduce the need for insulin in people with diabetes.

Such findings are fueling a push for dentists to play a greater role in patients’ overall health. Some 20 million Americans—including 6% of children and 9% of adults—saw a dentist but not a doctor in 2008, according to a study in the American Journal of Public Health this month.
“It’s an opportunity to tell a patient, ‘You know, I’m concerned. I think you really need to see a primary care provider,’ so you are moving in the direction of better health,” says the study’s lead researcher Shiela Strauss, co-director of statistics and data management for New York University’s Colleges of Nursing and Dentistry. 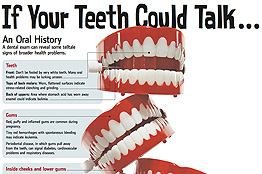 George Kivowitz, a restorative dentist with offices in Manhattan and Newtown, Pa., says he has spotted seven cases of cancer in 32 years of practice, as well as cases of bulimia, due to the telltale erosion of enamel on the back of the upper front teeth, and methamphetamine addiction. “We call it ‘meth mouth,’ ” he says. “The outer surface of teeth just rot in a way that’s like nothing else.”

Some of the most distinctive problems come from uncontrolled diabetes, Dr. Kivowitz adds. “The gum tissue has a glistening, shiny look where it meets the teeth. It bleeds easily and pulls away from the bone—and it’s all throughout the mouth.”

A gleaming, white smile is a sign of a healthy mouth, right? Not necessarily.

“Whiteness and the health of your teeth are totally unrelated,” says Mark Wolff, an associate dean at New York University College of Dentistry.

In fact, many dentists worry that people who whiten their teeth may have a false sense of complacency, since their teeth can still be harboring tooth decay and serious gum disease.

Even people who have no cavities can still have inflamed and infected gums. It could be that their saliva is particularly protective of their tooth enamel, while their brushing and flossing habits, needed to keep gum tissues healthy, could be lax.

Read the Full Article on The Wall Street Journal